A special but very small fish family is the family of the ghost pipefish or Solenostomidae. Their name they probably got because they are sometimes suddenly found or seen in a particular place. Here, they only stay a few days or weeks before they disappear mysterious like a ghost.

Ghost pipefish include one single genus (Solenostomus) and this with only six officially recognized different species. Some specimens have already an English name, when actually they are not yet even officially described and are waiting for approval.

They are regularly found in the eastern Indo-Pacific region, but also in the Red Sea (Egypt) specimens are found! They generally live in shallow waters - between 5 and 30 meters - and often in and near crinoids or feather stars. They are extremely seasonal and are mostly found only a few months of the year. Furthermore, in the current they move perfectly along with the moving arms of the feather star so that they are as good as invisible. A lot of reasons thus why they are so hard to find.

The life of the ghost pipefish actually starts as a larva adrift in the currents of the oceans. Shortly after birth the young ghost pipe fish starts looking for a host, and once found it will change both color and shape. When its camouflage has reached its maximum level, the ghost pipefish will start to reproduce. Once fertilized, the female will carry up to 350 eggs and this during the entire pregnancy. Just before birth the female will move to a quiet and favourable environment to give birth and release the young ghost pipefish. 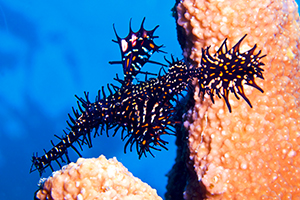 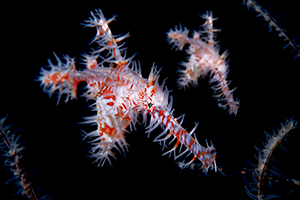 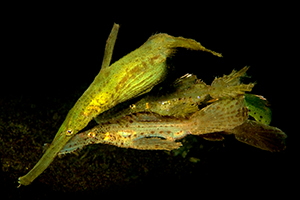 Ghost pipefish reach a maximum length of 15 cm and they hang almost always upside down. Most of them are not even bigger than your little finger or forefinger. They have a laterally compressed body, which is typical for all fish of the syngnathoid. The head is characterized by a relatively long snout and takes almost up to one third of their total body length. It is usually pointed downwards because the head is very essential to their feeding habits. Through their long snout they suck small crustaceans (like shrimps) from the bottom inside. So it is quite obvious why ghost pipefish usually hang upside down.

Ghost pipefish are much better to photograph when they are not manipulated. As with all other creatures, first I let the animal get used to my presence. After a while you will see you can approach the ghost pipefish very closely and shoot the picture you have in mind.